A Miraculous Story of Divine Grace

When we invoke the divine, which is the source of all power, benevolence and love through earnest prayer, grace flows into our lives. 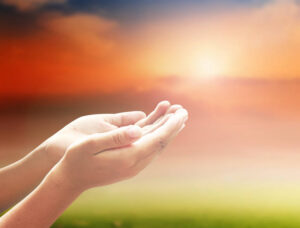 Divine grace brings many blessings such as peace of mind, inner strength, protection from harm, and freedom from fear and sorrow.

But divine grace does not come unsolicited. It has to be earned through humility and sincerity in our efforts to improve and grow.

For example, a teacher may be more likely to give a couple of extra marks to allow a student to pass a test if she knows that he is sincerely putting in efforts to improve and has come a long way in a particular subject. It will encourage him to keep up his efforts.

A story of divine grace

Here’s a story of divine grace that a dear friend of my mother once told me. Her name was Padma, and I used to address her respectfully as “Aunty”.

Aunty was a kind and gentle soul who had tremendous faith in her guru. She loved and revered him as divinity itself. She once told me a story about how her prayers and faith offered her great protection and solace.

One day, Aunty decided to clean the crystal glasses in her china cupboard. As she was unable to use a stool to reach the top shelf, she asked her granddaughter to climb up and hand her the glasses one at a time. She sat on a chair and wiped them down with a clean cloth and then handed them back.

As they were working together in this way, her granddaughter accidently dropped one of the large, heavy-bottomed crystal glasses. It fell on the tiled floor with a loud crash and smashed into smithereens. In a freak accident, one of the larger glass pieces bounced off the floor and flew directly into Aunty’s left eye, leaving her bleeding profusely and in excruciating pain.

She was rushed to the hospital where the doctors told her that her cornea was badly damaged, and she would likely lose sight in her left eye. She was rushed into surgery to remove the glass fragment.

After the surgery, as she lay on her hospital bed in tremendous pain, she prayed to her guru. She implored him to relieve her of the pain. With great anguish she asked, “What did I do to deserve this? Am I not sincerely trying to live in your service and faith?”

With such thoughts in her mind, she fell asleep. She had a dream in which her guru came to her, took her hand and together they travelled back in time to when she was a little girl of four in India.

She and her six-year-old brother were playing in the shed when they found an old light fixture lying on the floor. It was filled with twigs and straw and as they peeked in, they saw two newborn baby birds in a nest. Their eyes were still closed, and they had no feathers on their body.

Out of curiosity and childhood innocence, her brother picked up a twig and nudged the babies which then started to rasp and wheeze. He giggled and then poked at the large, bulging eyes of one of the birds which made it cry out loudly. He laughed and poked even more.

Seeing her brother laugh and thinking that this was fun, she too, picked up a twig and started poking the eyes of the other bird. Something inside told her to stop and not hurt the birds, but she didn’t listen.

As Aunty witnessed this scene in her dream, she was horrified at what she had done. She sobbed in pain and remorse. Her guru gently told her, “You blinded both eyes of that bird, I only allowed one of your eyes to get hurt.”

On hearing these words, Aunty immediately woke up. She realised that the accident with the glass was not an accident but something that happened as a result of her past actions. She thanked her guru for his love and compassion. She begged for forgiveness and prayed that she would never hurt another soul ever again.

Later, Aunty told me that even though the surgeon had warned her she would likely be blind in her left eye, she actually did recover an astonishing seventy percent of her vision in that eye. She attributed it all to the grace of the divine, her guru.

When we call upon the divine and surrender in faith, we invoke its grace and protection. Read, 4 Reasons for developing divine devotions on your spiritual path

When we keep a constant remembrance of the divine, we are saved from the sorrows that come from our worldly attachments and past karma.

To illustrate this, my guru, Swami Tejomayananda once described a fisherman casting a net in the sea while standing in shallow water. He said that the net would catch the fish that are further away from the fisherman. But those that swim around close to him will not get caught.

Through faith, prayer and righteous living,  we invoke divine grace and its benevolence into our lives.

Related articles:
9 ways to develop divine love
How to cultivate faith in the higher power

Daily Habits of a Spiritual Seeker

Do You Have the Qualities of a True Spiritual Seeker?

3 Simple Ways to Open Your Heart