My deep yearning to know the answers that would make sense out of my life, and life in general, have lead me to the threshold of many paths and teachers. However, it was only when I was ready that I became aware of my Guru, Swami Chinmayananda.

Swami Chinmayananda lived in physical form from 1916 to 1993. His transformation from Balakrishnan Menon, an ordinary man to Swami Chinmayananda, spiritual giant is indeed extraordinary. Below is an overview of his life and work.

Balakrishnan Menon renounced his earlier worldly lifestyle and become a Hindu monk in February 1949. He was initiated into monk-hood by the great saint, Swami Sivananda and gained the new name, Swami Chinmayananda.

Seeing his exceptionally brilliant mind and intensity to seek out the goal of human existence, Swami Sivananda recommended that he study under the tutelage of the great Vedantic master, Swami Tapovanam.

Swami Tapovanam was a recluse who did not stay in one place for long. He spent his time in the Himalayan mountains moving from place to place.

Swami Chinmayananda turned out to be an exceptional student who could keep up with the rigorous lifestyle and the strict discipline of his master. While the lessons were in Sanskrit, the language of the ancient spiritual texts, he wrote out his notes in the modern language of his schooling: English.

He totally immersed himself in his spiritual studies and a life of meditation. In just two short years, in the tranquility of the great Himalayan mountains, Swami Chinmayananda gained inner spiritual enlightenment.
In December 1951, Swami Chinmayananda came down to the plains to teach spirituality to the ordinary man on the street. His approach was startlingly different.

Traditionally, the ancient Hindu scriptures were taught only to the male members of the priest class in the ancient language of Sanskrit. But Swami Chinmayananda shocked everyone by teaching freely and openly to men and women alike without any class distinctions – and in English!.

He was astonishingly popular. Indoor venues soon became too small to hold the masses that came to listen to him. Many came just to feed their curiosity about this remarkably modern Swami (monk). His talks soon took place in open public grounds which could accommodate thousands of people.

Swami Chinmayananda, with his ability to reach into the hearts of people with his intellectual brilliance, insight, clarity of thought and down-to-earth manner, brought about a cultural and spiritual reawakening in a newly independent India.

He travelled extensively in India and abroad for 42 years, staying only a few days in each place before moving on. He worked grueling 18-hour days, traveling from place to place.

In the nights, he would often be seen writing letters to his devotees at 3 am in the morning. Incredible as it sounds, on a daily basis, he would write over 80 hand-written letters. In his lifetime, it is estimated that he would have written over 750,000 letters!

Swami Chinmayananda or Gurudev, as he is lovingly called, had a tenacious memory and an uncanny ability to remember names, addresses, people and events accurately for decades afterwards. There are reports of people who he recognized and called out by name nearly 30 years later. Another devotee remembers talking to Gurudev in a car while driving him to the airport. Their conversation was interrupted when they arrived at their destination. They were not able to speak again until Gurudev’s next trip the following year. When they met, Gurudev calmly pick up the conversation as though they had just been speaking, “So, as I was saying…” This is mind boggling when one considers that he met thousands of people every year.

Swami Chinmaynanda left his mortal body on Aug 3rd, 1993, in San Diego, California at the age of 77.

The outer expressions of Swami Chinmayananda’s divine work were only a minuscule part of the immeasurable impact that He had on the inner transformation of the lives of His devotees. His whole life was the highest expression of loving devotion to the Supreme whom he saw in all.

For a full Biography of Swami Chinmayananda, click here. 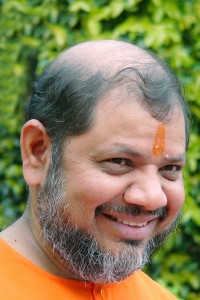 Swami Tejomayananda, or Guruji as he is affectionately addressed, is the gentle, wise, loving, powerhouse who is the Head of Chinmaya Mission Worldwide.

After his Guru, Swami Chinmayananda left his mortal body, Guruji took up the enormous responsibility of overseeing the activities of the nearly 300 centres all over the world including all the social, community and rural development projects and institutions; and still be the spiritual teacher and guide for seekers everywhere.

Guruji is an enlightened master with an assuming, humble demeanor. He walks amongst us, as we do – his soft smile and gentle manner hiding the spiritual giant within.

Guruji embodies one who has a perfectly developed head and heart. He is a Vedantic master who has full knowledge and understanding of the profound and subtle truths about spiritual life and is able to communicate them effectively in a simple manner. At the same time, he has a compassionate and loving heart that overflows with devotion to the Divine that he sees in all.

Following in the footsteps of Swami Chinmayanandam, Guruji travels extensively all over the world, lecturing and guiding spiritual seekers. He speaks a few Indian languages and when travelling abroad, he speaks in English. In his travels. He meets thousands of people, teaching and uplifting them through his talks and melodious devotional songs. Guruji is a singer, musician and composer who plays the harmonium. (an Indian instrument which is a cross between a piano and accordion).

For someone as learned and scholarly as Guruji, his manner is down-to-earth and friendly. He teaches by making difficult concepts easy to understand. He speaks to suit the audience. When speaking to general audiences, he keeps his topics and tone, light and simple. He loves telling jokes and always finds the right ones to embellish the point he is making. He is able to point out the follies of our way of living and make us laugh at ourselves. On the other hand, when instructing serious spiritual seekers on advanced scriptural texts, he dives fully into the philosophy and takes them to depths that leaves them awestruck with wonder and reverence.

Ordinarily, one may feel intimidated by someone as accomplished and saintly like Guruji. But Guruji is approachable and always makes time for seekers. Outside of his lectures, he meets them in informal gatherings which are invariably punctuated with his characteristic wit and humour.

Guruji has written dozens of books which are as simple to read as they are deep and transformative. Here are just some of the titles: The Game of Life, Understanding Emotions, Right Thinking, Born to Succeed, Love Thyself, Graceful Aging, Peace in a Restless World, Take Charge of your Life, Gems of Wisdom, Is there Life after Death? and Meditation, a Vision. He is constantly composing, writing and teaching.

Guruji’s entire life is dedicated to the good of others. Selfless service, humility, loving acceptance, patience, compassion and deep devotion are just some of his qualities. Once, after Swami Chinmayananda was no longer in mortal form, Guruji was asked how it felt to be in his master’s shoes. He immediately answered, ‘I am not in his shoes. I am at his feet.’ Such is the humility and greatness of Guruji which has endeared him to our hearts.

Gratitude to my other Teachers

There are many teachers who have taught and guided me on my path and I would like to express my gratitude by naming a few of them here. Most notable is my local Toronto acharya (teacher), Swamini Shivapriyananda. She has been the portal through which Swami Chinmayananda and his teachings came into my life. I am eternally grateful. My other teachers are Swami Shantananda from New Jersey, Swami Ishwarananda from Los Angeles, Swami Swaroopananda from India/Australia, Swami Prakashananda from Trinidad and Swami Bodhatmananda from India. And there are numerous others who have inspired and guided me and continue to do so. My gratitude to all!