Vedanta is an ancient wisdom tradition that originates from the inspired revelations of great Himalayan sages. They taught these spiritual teachings to their disciples, who then taught them to their disciples. The teaching lineage that began is very much alive even today.

There are no definitive sources that can put an exact date to the origin of Vedanta. Since very little is known about the background of the great sages or even their names, I often wondered how the first sage became a sage? What were the circumstances that led up to his spiritual seeking? One day I sat down and wrote a story about how this may have happened .

Picture a time long, long ago, before the birth of modern civilization. There lived a young man named Dheera in a small village by the sparkling waters of a river in the south of India.

Dheera was a nature lover and deep thinker. He noticed that there was perfection, intelligence and symmetry in the world around him that could be found in every flower and blade of grass. He wondered, “There is so much beauty around me! What is this world I live in? Where do the sun, moon, rivers, mountains, trees and vast sky come from? Who is the creator of all of these? Who made me!?”

Dheera decided to leave home in this quest for knowledge. He searched for a long time, and yet there was no sign where the Creator could be.

The years rolled by, until one day, Dheera found himself at the foothills of the Himalayas. Dheera loved the mountains and lived there for a long time, searching in caves, valleys and forests for clues to the source of the world. Although he had no success, he never gave up. He was convinced that if the Creator existed, he would find him there, in the majestic grandeur of the mountains.

Connecting to a Higher Power

One day, Dheera woke up in the early hours of the dawn with a sense of excitement and expectation. He found a spot by the side of a mountain, sat down and glided into a deep meditation.

In a vast meditative silence, Dheera heard words that came not from a place outside but within himself: “The world is a manifestation of my Infinite Power… I exist in the form of this world…There is nothing in this world that is not pervaded by Me.”

The words that started pouring into his mind revealed the secrets of the universe. They came in the form of a steady stream of melodious chants or mantra-s. They infused every cell of his body, nourishing him like ambrosia from above.

Later, as he slowly opened his eyes and came out of that still quiet state, he was astonished by the revelations that he had had. He was filled with supreme gratitude and love.

Dheera spent many years meditating in the mountains. He glided into unfathomable depths within himself and a totally different state of consciousness where there was no concept of time and space.

There, he recognized his essential divine nature as pure Spirit, untouched and totally separate from the personality called Dheera. 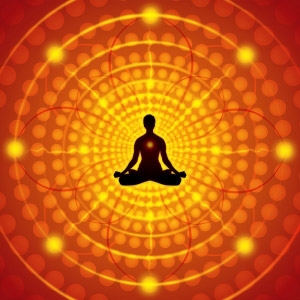 Then came the most the glorious realization of all—what is known as Self-Realization.- He recognized that his essential Self as the same spiritual Self and core of all beings and things everywhere.

The Source of creation was not to be seen outside but experienced within himself as his own true Self!

He was the Truth that he was seeking his whole life!

Becoming a source of illumination to others

From then on, Dheera spent his life in regular meditation. The village folk living in the mountains came to know of him. His wise and benign appearance attracted not only their curiosity but also reverence. Slowly, many spiritual seekers who had the same burning questions about life sought him out.

Dheera taught the seekers how to meditate and became their teacher and guide for life. They called him Guru Dheera. ‘Gu’ means ‘darkness’ and ‘ru’ means ‘remover of’. So, the word, ‘Guru’ refers to the one who removes the darkness of ignorance with the light of his knowledge.

A handful of serious and dedicated seekers with a burning desire to gain the Ultimate Truth and be liberated from the sorrows of life, renounced all their worldly ties and asked to be Guru Dheera’s disciples. They spent their entire lives learning from him.

The beginnings of the Guru—Disciple Lineage

In time, following the guru’s instructions, one or two of his best disciples become Self realized.

When Guru Dheera passed away, these disciples became the next generation of teachers for other serious seekers with the same universal questions.

In this way, a guru-disciple lineage began.

Vedanta—a science for all mankind

The knowledge contained in the discussions between the teachers and the students is called Vedanta.

The fundamental truths expounded in it do not restrict its applicability to people of any particular race, religion, culture or background in the past, present or future. “There is only one Truth, it’s expressions are many” say the great wise men.

Because of this Vedanta is considered a spiritual science for all mankind.

Your Spiritual Journey and Purpose

The Journey of the Soul

Meditate Successfully With This Method